Journal of Aksaray University Faculty of Economics and Administrative Sciences

Articles to be submitted to be evaluated for publication in the Journal of Aksaray University FEAS are prepared in accordance with the following rules:

In the main text, in the indents section in the paragraph tab; first 12 pt, then 6 pt and line spacing should be 1.15 cm.

A study prepared in accordance with the sample article format should not exceed 25 pages. Sections of the Manuscript

Sections of the Manuscript

Keywords should be between 3-5 words.

Quantitative and qualitative studies should include Introduction, Method, Results, and Discussion sections. In the method part, there must be subsections of Sample / Study Group, Data Collection Tools and Operation. Model subsection should only be included if an original model is used.

Review-type studies should present the problem, analyze the relevant literature competently, emphasize the deficiencies, gaps and contradictions in the literature, and mention the steps to be taken to solve them.

Other studies may change may according to the type of the subject, but maximum care should be taken not to form sub-sections in detail that would make it difficult for the reader to benefit from the text.

For the use of basic items in bibliography, see the section called Basic Bibliography Items.

The main titles in the text (Method, Findings, Discussion) are written in capital letters, justified, numbered consecutively and bold. Paragraph indentation is left 0 cm, right is 0 cm, while line spacing is set first 12 pt, then 6 pt.

In the second level headings, the first letter of the words is written in capital, justified and bold. Paragraph indentation is 0.63 cm left and 0 cm right, while line spacing is set to 8 pt first, then 6 pt.

In third level headings, the first letter of the words is capitalized, justified and italicized. Paragraph indentation is 1.27 cm on the left and 0 cm on the right, while the line spacing is set as 8pt first and then 6pt.

See the Basic Citation Styles table for details.
Sorting the Citations:
References for parentheses should be listed alphabetically.
For instance,
(Arpacı, 2013; Arpacı and Kuyu, 2010, p. 15; Karman, 2000, 2004, 2010; Zengin, Warrant, Güner, Aykut and Karpat, 2013)
Transferred citation from an other source:
A citation from another reference within a reference is shown as below.

(Torgerson, 1958, cited from p.1-8, Baykul, 2000; Zengin, cited in 1957, Pinar, 1999)
Basic Citation Styles
ADDITIONAL INFORMATIONS
Emphasis:
Do not use bold in the text, except for the basic variables in the headings and tables and figures. Matters that want to be emphasized should be made using the " " sign or italics.
Item Itemization:
The ordering and itemizations in the text should be made as shown in the sample article format, instead of ordering 1, 2, 3 one under another.
Direct Quotations:
Direct quotations are written with 1 cm indent from the right and left, 8 pt, Times New Roman font.
Basic Bibliography Items

The Journal of Aksaray University FEAS, observes and follows the Code of Conduct and Best Practice Guidelines prepared by COPE (Publication Ethics Committee) and the publication ethics principles, standards and recommendations determined by the ICMJE (International Committee of Medical Journal Editors). Following the Cope Guidance for Editors is within the scope of the Editors' duty, and the COPE Ethical Guidelines for Peer Reviewers must be followed by journal referees. All articles that do not comply with the mentioned ethical standards are removed from the publication. This rule also valid for published articles that contains potential irregularities and non-conformances. Within the scope of publication ethics, all stakeholders are expected to comply with the ethical responsibilities briefly described below. Otherwise, any ethical case is evaluated in accordance with COPE rules.

The relationship between the editors and publishers is based on the principle of the independence of editors.

Editors are obliged to comply with the policies of the "Blind Review and Review Process" stated in the journal's publication policies. Therefore, the editors ensure that each manuscript is reviewed in an unbiased, fair, and timely manner.
Quality Assurance:

Editors must make sure that articles in the journal are published in accordance with the publication policies of the journal and international standards.

Neither the owner of the journal, publisher, or any other political or economical factor can influence the independent decision making of the editors.

Editors, acknowledging that there may be conflicting interests between reviewers and other editors, guarantee that the publication process of the manuscripts will be completed in an independent and unbiased manner.
Publication Policy
1. The Journal of Aksaray University Faculty of Economics and Administrative Sciences is a peer-reviewed, scientific and periodical journal published four times-- in the months of March, June, September and December-- in a year. The Journal of Aksaray University Faculty of Economics and Administrative Sciences, publishes original research articles and reviews prepared in Turkish or English in the fields of Business, Economics, Public Finance, Public Administration, International Relations, Econometrics, Labor Economics and Industrial Relations, Management Information Systems.bThe language of publication of the journal is Turkish and English.
2. The articles sent to the journal are subjected to the preliminary examination as to form and content at first. Form requirements and submission process must be carried out in accordance with the conditions of the Journal. The works that do not comply with these are subject to editorial refusal. The articles found acceptable in terms of form and content are presented to the editorial board to appoint referees. No guarantee is given for an article submitted to the journal to be taken into the referee process. In addition to this, the date for the evaluation process of the articles will not definitely be given.

3. Articles submitted to the journal are sent to at least two reviewers specialized in the subject field of the article for evaluation. In case that one of the referee reports is positive, and a second referee is negative, the publication decision is made by the journal editors. If necessary, the editorial board can send the article to a third reviewer for evaluation.

4. Articles submitted to the journal are not included in the evaluation process of another journal at the same time; nowhere should it have been previously accepted or published. Responsibility for this matter belongs to the author(s) of the article.
5. As required by the open and free academic publishing principle, the Journal of Aksaray University FEAS does not charge for article submission or evaluation fee.

As required by the open and free academic publishing principle, the Journal of Aksaray University FEAS does not charge for article submission or evaluation fee. 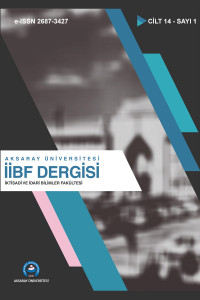